Consumer confidence rallied in July as shopper sentiment improved, but there are lingering concerns about the UK economy ahead of Brexit.

Consumer confidence rallied in July as all but one of the measures received a summer boost, according to GfK’s monthly index.

The overall index score was up by two points compared to the previous month, although it remains in negative territory on -11 and below last year’s level of -10. Consumer confidence was last positive in January 2016 and it will take several months of increases to reach that level again.

“The small increase in consumer confidence this month is encouraging but we are still in negative territory,” says GfK’s client strategy director Joe Staton. “Perhaps there are consumers out there who feel we will rise above the current ‘no deal’ worries and that the consequences for our wallets can only be good?”

Shopper sentiment saw the biggest jump, increasing by six points compared to both June 2019 and to July 2018, with the major purchase index reaching a score of four. 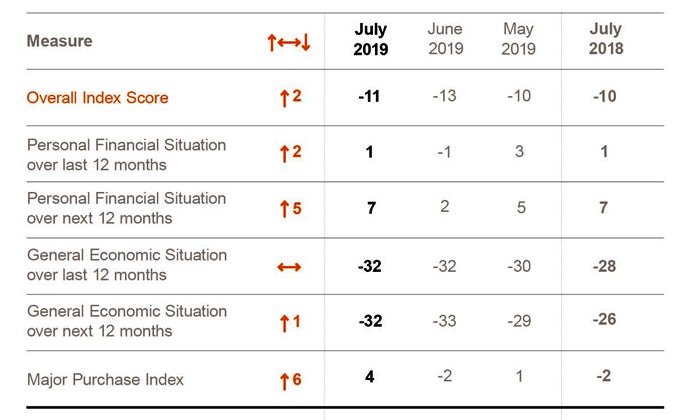 While Staton says there are not yet signs of a “Boris bounce” after Boris Johnson became prime minister last week, low interest rates and inflation, as well as a “buoyant” labour market and growth in real wages is boosting attitudes.

“Consumers have generally been less affected by Brexit uncertainties than business since the EU referendum. However, the coming months to the 31 October departure date will test the strength of this confidence,” he warns.

This is played out in consumer concerns about the economy. Perceptions about the general economic situation over the past 12 months were flat in July compared to the previous month and down four points compared to a year ago.

There was a slight uptick in feelings about the general economic situation over the next 12 months, but with a score of -32 this measure is still very negative.

Why brands are struggling to find marketers with the right skills
The ever-changing martech landscape and horizontal innovation
To Top
error: Content is protected !!