When I was a young, beautiful marketing professor in the late 20th century, it was customary to show the amount of advertising money spent across the various channels in pie chart form. You’d have a big blue chunk for TV, another giant red one for print and then a bunch of smaller multicoloured slices for outdoor, radio and the rest.

The choice of a pie chart was telling. Because although there were small variances from year to year, in general the carve up of advertising budgets rarely changed very much. Hell, in 1997 you could use a transparency on an overhead projector (we did that back then) with a pie chart from 1989 and feel relatively comfortable that the proportions were still relevant seven or eight years later.

And then the internet came. And after that social media. Followed by digital. And the pie charts quickly turned into line graphs because shit was changing at the speed of light. Every year told a different dynamic story of the fall of some media and the rise of others. In less than a decade the whole media map changed. New kings were crowned, old emperors diminished.

The dynamics of advertising spend continue to surprise. Most notably there is a clear battle for eyeballs opening up between digital video delivered through Facebook, YouTube and subscription video on demand (SVOD) services like Netflix, and the traditional TV broadcasters with their recent VOD additions. The streaming wars of the 2020s promise to be a bloodbath as too many competing platforms spend too much money on too many shows and charge far too little for it.

But the major dynamic of the last decade, the rise of internet advertising, is finally slowing. That was the message from Zenith’s new Advertising Expenditure Forecast released this month. While spending on internet advertising grew by 17% in 2018, it is forecast to grow by just 12% this year and that global growth rate will fall to 9% by 2021.

The biggest and oldest screen of them all, which has changed little in the past century, has become more powerful than ever.

It’s worth acknowledging that only in digital marketing would a 9% annual growth rate be seen as some kind of failure and, while Zenith predicts a slow-down, internet advertising will still absorb more than 50% of global budgets for the first time by 2021.

But the growth in digital investment is slowing – as it had to. And that means two things. First, if you thought the media industry was competitive over the past decade just wait for the decade to come. The ‘digital duopoly’ of Facebook and Google must now turn on each other, on TV and – to some degree – the media agencies they supply, to ensure the growth fix they have become accustomed to throughout their short but astonishing trajectories.

But this also makes for some surprising side-stories too. The slowing of investment growth for internet advertising means that, for the first time in many marketers’ professional memories, the fastest-growing channel for ad spend next year will be a non-digital one.

Cinema, that ancient old fucker, is hot again. Zenith estimates a 12% increase in ad spend in 2020.

It’s a surprising champion for only as long you don’t think about the trends currently obsessing our industry. If one were to list the key requirements of advertisers we would probably focus on five major ones.

Marketers’ only shot at influence is to embrace the CMO title

First, they are seeking brand safety and the certainty of knowing what media their marketing material will and won’t appear next to.

Second, there is a continued sense that a viewer may not actually be a viewer and, despite paying for eyeballs, many advertisers are paying for bots, Chinese click farms or the bottom of a web page that no one ever gets to.

Third, advertisers have tired of the idea of the small screen being the future. Big screens that demand attention and enable social viewing remain the golden receptive moment.

Despite that desire, the precipitous decline of TV viewing among younger consumers makes advertisers’ fourth requirement a growing need to reach youth audiences, who spend less time than their 20th-century peers in front of the box.

And finally there is ‘the long of it’. Every well trained marketer knows about Peter Field and Les Binet, understands their 60/40 recommended split between long- and short-term spend, but fails miserably to get anywhere near it. The fifth objective is to swing more money against big, emotional, brand-building fare. 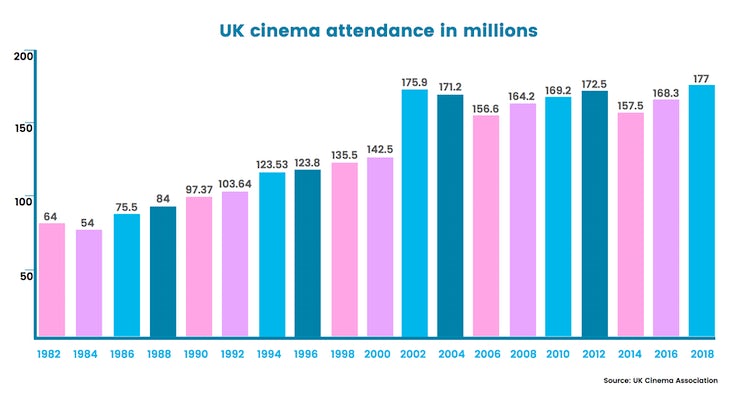 And with those five precepts in sight it starts to become clear why cinema can project such a rosy future for advertising investment. Here is an advertising medium that over-indexes toward younger segments who literally pay to see your media, who stare at a screen the size of a building inside a darkened room. It’s a medium where advertisers can be certain of the surrounding media context and which ultimately is the most social, emotional, long-range dream builder of them all.

And let’s add one more factor – audience growth. Despite an endless array of sockless aficionados holding up their smartphones and predicting that the little thing in their hand was the future of video; despite the push toward programmatic and real-time media buying; despite the triumph of granular targeting and personalisation; through all of this, cinema has been growing its audience. The biggest and oldest screen of them all, which has changed little in the past century, has become more powerful than ever.

More than 177 million people went to the cinema in this country last year and – with a suite of movies that include The Lion King, Toy Story 4 and the biggest movie of all time, Avengers Endgame – there is every chance that this year could be just as good. In fact, cinema admission have been gradually increasing since the 1980s. Despite the arrival of TV, VCRs, DVDs, digital video and now streaming services, cinema has maintained its hold on audiences.

Advertisers would be silly not to catch on. It’s famous for the highest CPM in the business, with a 30-second spot costing somewhere in the region of £40 per thousand adults reached. That’s more than five times more expensive than TV or Facebook but, again, consider cinema’s advantages along with its premium price.

In an age of dodgy data, inattentive audiences and tiny screens there might never have been a better time to spend a little on the biggest screen of all.

The ever-changing martech landscape and horizontal innovation
Strategy is a luxury for small brands, so focus on being better known
To Top
error: Content is protected !!