Last weekend, my partner and I took a bicycle tour to a small village near our home, called Adendorf. Each year, it hosts an iconic garden exhibition – a sales show with plenty of champagne and canapés.

Fitted champagne cooler? No problem. Smartphone pocket? Just tick here. We fell in love with the blue model and considered what needed to go from our terrace to make space. Frank, the owner, told us that all 15 display chairs had now been sold. But ours would ship within four weeks. Did we need a €4,000 roofed wicker beach chair? We absolutely did. That blue one.

On this afternoon, we shot right through the marketing funnel, from ‘no clue’ to ‘purchase’. We experienced AIDA (attention, interest, desire and action – not Verdi’s opera) in under an hour.

No, the funnel isn’t perfect. But as a communication device, it’s priceless.

Technically, the marketing funnel tries to map how target customers interact with a brand, from knowing it to buying it, with steps in between. But here’s the problem: there’s not just one purchase process. Exactly how people buy is complicated, differs by product and keeps changing.

No wonder many clever people claim the funnel is too simplistic, hierarchical or inaccurate (case in point: roofed wicker beach chairs). Technically, the critics may be right. But here’s something the funnel does better than any other tool I’ve come across: it helps marketers set priorities and make the case to the CEO for long-term marketing.

Let’s look at a recent example. A young B2B marketer (let’s call her Dianne) works for a printing company. Located in a high-cost region, the firm specialises in high-value print jobs, such as catalogues and brochures.

To help the business grow, Dianne wants to build a premium brand. But her CEO has always been saying ‘no’ to advertising. He loves email marketing that triggers a direct sales uplift. Could the funnel help Dianne convince the CEO? Together we took a crack at it.

“I can’t do a funnel. We don’t have much data,” Dianne said. That fix was easy. Together we found a research firm that has a panel of buyers. They included one simple funnel question in the ongoing survey: “For these brands, which best describes your situation: heard of, consider, prefer, bought this year, bought several times this year?”

A look at the loss rates was even more revealing – those are the percentages of people who don’t jump from one funnel stage to the next. For example, 65% considering but only 35% preferring means Dianne’s firm lost almost half of all potential buyers at this stage (46%, to be precise). Her competitor lost only 25%. 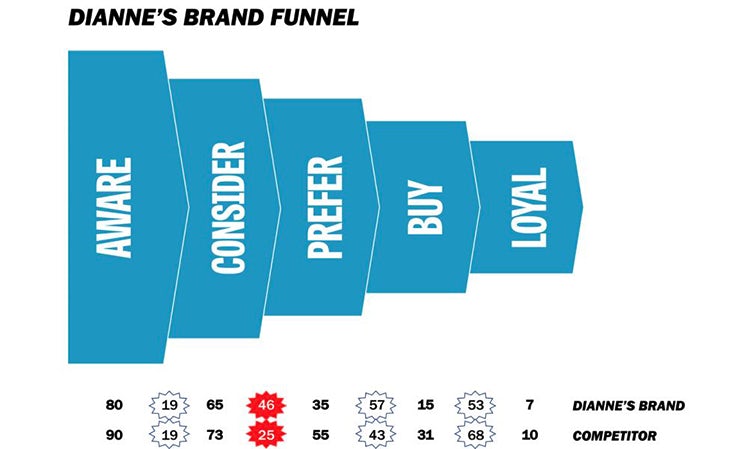 The case for brand building

Dianne and I were now left with a crucial question: why did buyers prefer Dianne’s competitor more? From her long experience Dianne had a list of 20 items that matter to buyers, such as price, quality, speed, reliability, creative advice and service.

With this list, the research agency did more funnel research, this time also asking buyers what they think about the different brands (I’ve simplified here – they did a full brand driver analysis for each funnel stage).

The surprising insight: creative advice was very important to buyers. And those who didn’t prefer also didn’t think Dianne’s firm would give good creative advice. Dianne’s emotions were sparked. They had a full creative department – but very few buyers knew it.

Dianne did the numbers. If they could halve the losses between consideration and preference, by proving to people her firm gives great creative advice, sales could go up by 50% or more (all things being equal). That’s a lot of new business.

The funnel helps marketers set priorities and make the case to the CEO for long-term marketing.

Dianne’s team developed an advertising campaign, featuring their most creative client projects. They estimated a £400,000 advertising budget would be sufficient to reach buyers.

Time to meet the head of finance (she took me along, so I would take the heat). To her surprise, the meeting went well. The annual sales uplift, both agreed, could be up to £15m. Even if advertising took two years to work, that uplift would easily support £400,000 more budget.

A week later, they jointly made the advertising case to the CEO. After a tough debate, the CEO green-lit a £100,000 test campaign (and later the full budget).

No, the funnel isn’t perfect. But as a communication device, it’s priceless.

Try This: Know your funnel(s). If you don’t, get the data. Funnel research is typically fast and cheap to get. Outside the marketing suite, use the funnel to make the case for brand investments. Show how people’s perceptions of a brand move them into the franchise (or make them loyal).

Still unconvinced? Then picture two scenarios for a CEO discussion. In the first, you walk in and say: “I want to spend £400,000 on an advertising campaign.” In the second, you say: “We are losing 46% of all considering buyers. Our competitor just loses 25%. People think we aren’t creative, but we are. Let’s fix that leak. I need £400,000 for an advertising campaign. The prize? Up to £15m in new sales.”

Which pitch is more compelling? I’d go with the funnel (and with the roofed wicker beach chair).

What advertisers need to know – Marketing Week
‘There was no silver bullet’: How Change4Life tackled childhood obesity
To Top
error: Content is protected !!