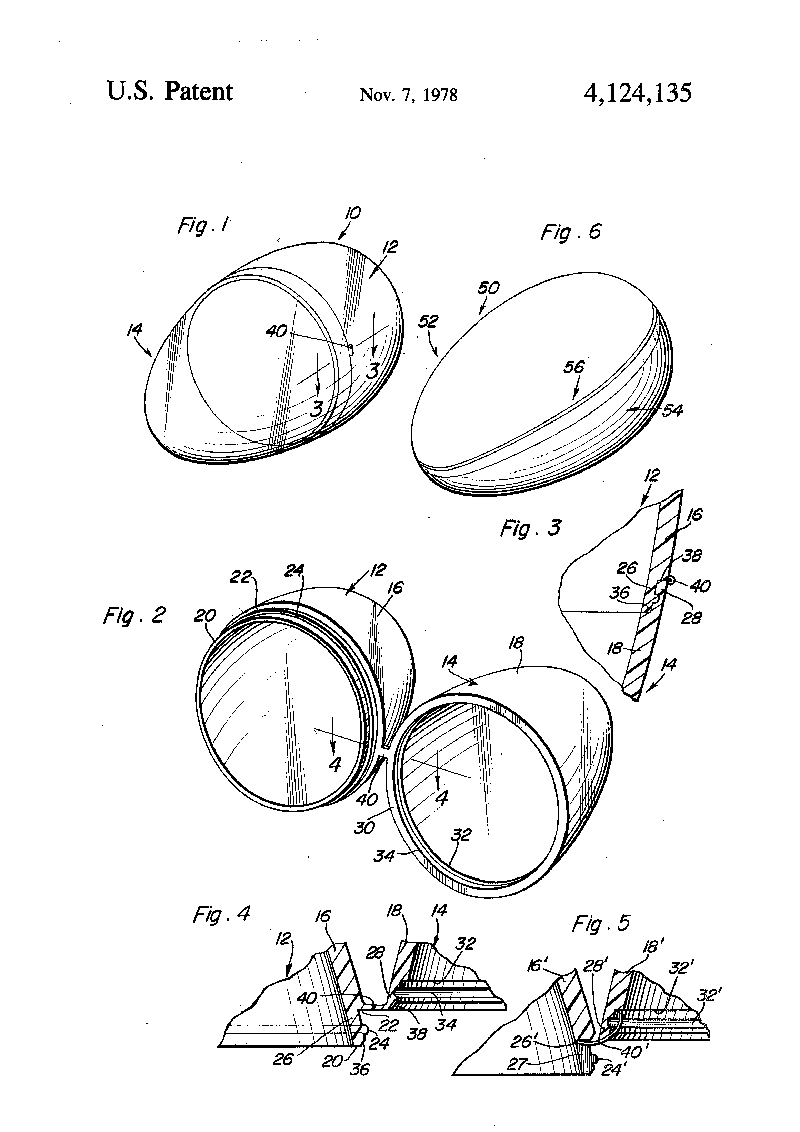 This Sunday, as millions of children tear into Easter baskets and begin strewing candy wrappers, toys and other holiday jetsam around houses nationwide, parents can thank father-and-son inventors from Illinois for cutting in half the number of plastic egg pieces they have to pick up.

Erwin and Donald Weder had a stroke of genius when they came up with the idea for the hinged plastic Easter egg. Patented in 1978, the simple yet effective concept changed forever the post-holiday cleanup process. Now, instead of trying to match discarded egg halves with the correct pieces, harrowed parents have one whole egg to deal with.

Featuring a small plastic hinge binding both pieces together, this clever container became the perfect way to conceal treats from prying eyes. The abstract for U.S. Patent 4,124,135 says it all: “the Easter egg may be opened or closed to enable candy, toys, figurines or any other items desired to be placed therein so that they will appear to be inaccessible but yet the egg can be opened to provide access to the items.”

“My father was the primary inventor,” says Donald, now 71. “I facilitated its use and added a few improvements to the idea.”

The younger Weder is exceptionally modest as he deflects praise to family members and associates for their contributions to projects. However, that’s not the only thing exceptional about him: he is one of America’s most prolific inventors. Weder is part of an elite group of inventors internationally who have passed up Thomas Edison in the total number of U.S. patents granted to them. With 1,413 in total, Weder has easily eclipsed Edison’s 1,093 U.S. patents.

Donald Weder is the president of Highland Supply Corporation of Highland, Illinois. The company is a major player in the floriculture industry, which is the inspiration for many of his inventions and patents. He, his father and associates have developed designs and production methods for countless products related to the florist trade, including the first Florist Foil and its successor, Plastifoil, flower pots covers, decorative wrappers, flexible packaging and many, many more products.

“Our company invented the decorative coverings that you see around many flower pots today,” Weder says. “We created a way of laminating Florist Foil with different colors, designs and textures to make the pot more attractive while protecting it too.”

Weder also patented a number of ideas that help the environment, including water-based inks used in printing. This product has been important in reducing pollutants in nature, including the volatile organic compounds found in oil-based paints.

Inventing things seems to be second nature to Weder. He is working with a researcher on a project trying to detail how the creative process is hatched. However, even he finds it difficult to identify all of the elements required for inspiration. At least for Weder, it appears that necessity is indeed the mother of invention.

“Most of our inventions relate to things we could produce and sell,” he says. “Some of our more successful products include the flower pot covers, wrappers for bouquets and a process for making Easter grass.”

Yes, he has also had a hand in making the grass-like plastic material in many Easter baskets that cushions those single-piece plastic eggs. It is also used as a decorative element in numerous floral presentations.

“We found a way of creating a much-better quality product that is also inflammable,” he says. “It’s still doing quite well.”

The innovative spirit appears to be hereditary. Weder’s father was also an accomplished inventor, developing the beauty corsage container in 1937. He came up with the idea and created the equipment to produce it using the parts of a wringer washing machine and a treadle sewing machine.

“My father also invented the folding Christmas tree and the aerosol can,” the son claims, though other inventors ultimately received patents and credit for these items.

Though the elder Weder died in 1987, the company he founded remains a family-owned business. Donald and his sister Wanda continue to be active in running Highland Supply. Today, two of Donald’s sons, Erwin and Andrew, have a hand in operations.

And the inventions keep on coming. Currently on the drawing board are a fire suppression system and a concept for cleaning steel and copper wire—a staple of the floriculture industry. Recently, Weder applied for a patent for an ecologically sensitive incubator that uses earthworms to consume paper in seven days or less. This process helps florists create nutrient-dense material for use with potted plants.

Now if he could invent an Easter egg that puts itself away, Weder might achieve a rank even higher in prominence than the long-eared hopping hero who brought them—at least with parents who have to clean up that post-holiday mess.

How Scientists Are Recapturing the Magic of a Beloved, Long-Lost Tomato | Arts & Culture
A New Museum Sheds Light on the Statue of Liberty | Arts & Culture
To Top
error: Content is protected !!