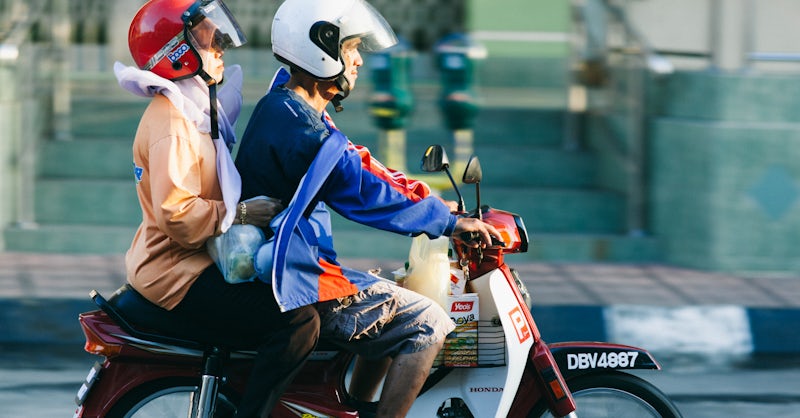 You’d have to work pretty hard to pitch the concept of a ‘family motorbike’ in the UK. Anyone buying a motorbike in this market isn’t looking for one they can fit their kids on.

But head to the Thai market and you’ll find it common to describe a motorbike as a มอเตอร์ไซค์ครอบครัว, which means exactly that. In this market, the vehicle is seen as a valid solution for transporting multiple family members about the place.

Persuading new audiences that your offering is relevant to their needs isn’t as simple as translating your content into the language of your target market. You’ve also got to find a way to make your brand relevant to local needs and expectations. That means understanding how many people they expect to fit on a bike, as well as the language that’s most effective in selling that bike.

In an individualistic culture such as the US, motorbikes are sold on the promise of freedom. Asian countries often have a more collectivist mindset – meaning your value to a group or community is seen as being more important than your freedom and personal fulfilment as an individual. That’s why in Asian cultures you’ll hear motorbike brands championing how ownership fits in with family life rather than how it serves an individual’s interests.

Your brand’s tone of voice doesn’t just help you stand out from the competition, it also helps your audience know what you stand for and how you can meet their expectations. It needs to be tailored to the environment you’re in and that really depends on local culture. That’s why really successful international brands tailor not only their products but also their tone of voice to each new market they enter.

Honda – the king of reinvention

Honda is one of the most adaptable global brands when it comes to reinventing itself. The Japanese automotive brand is almost unrecognisable in each of the different markets it inhabits. It alters its tone of voice to present itself most effectively in each one.

In collectivist Asian markets Honda makes a point of positioning the brand at the heart of the community. In Thailand it boasts that it is การเป็นบริษัทที่ทุกสังคมต้องการให้ดำรงอยู่ (‘striving to be the company that society wants to exist’). The Thai tone of voice is more involved, sociable and community-focused. This would probably come across as paternalistic in the West.

Reaching new global audiences requires more than just language translation. Your brand message needs to be adapted so that it creates maximum impact in its new market.

There’s far greater tolerance for quirkiness in markets such as Japan and Thailand. Honda uses cute cartoons to get its points across in Thailand; in its Japanese home market cats feature in the marketing materials. It would be inconceivable to do this in a market such as the US, where ‘cuteness’ and ‘motorbike’ are seen as mutually exclusive concepts.

Honda’s tone of voice also helps novice consumers understand products better. Many emerging markets are seeing household incomes rise rapidly and consumer lifestyles changing extremely quickly. Customers may be considering buying products that are completely new to them and for which they have little frame of reference.

In the Thai market, Honda puts its products into a lifestyle context using Thai models to really show which type of person each bike is aimed at. That approach is entirely absent in the much more mature Japanese home market, where Honda relies on product specifications alone to let customers pick the right bike for them.

Honda hasn’t just translated its website to enter new markets, it has also reworked its brand identity for maximum success. The tone of voice it has adopted in very different markets really reflects its understanding of local cultural values. This approach is known as transcreation – adapting messages to ensure they carry maximum impact in a different culture.

Relying on its own legend

Not all brands go as far as Honda when it comes to reinventing themselves and their tone of voice in each global market. When the much-loved US bike brand Harley Davidson entered India’s market it barely changed a thing about the way it communicated its brand. Instead it relied on its Americana authenticity and asked local bikers to tell the story of how the brand is relevant to their lives using social media.

The result is that the brand communications look and feel very similar to the US home market – except they feature Indian riders on Indian roads and landscapes.

Not all brands enjoy Harley Davidson’s legendary status, and even this brand has now admitted it needs to start working in local languages rather than just relying on English. Few brands are able to travel far on the values of the home market. That’s why messages need to be adapted when they are moved into new cultures.

Your brand needs to prove that it meets the needs and expectations of every audience it speaks to. Sometimes these aren’t wildly different from market to market, as humans generally share similar values. One example of this is how we all approach modern working life.

UK and Germany are both developed European markets that have a great deal in common, such as office culture. Brits and Germans may have similar ambitions when they dress for the office – they want to look smart and professional and suitable for promotion. However, there are some significant cultural differences.

Germans expect greater formality in tone and they value seriousness far more than the Brits. In the UK it’s culturally important not to seem stuffy or over formal, and people are mainly obsessed with dressing in a way that’s appropriate for the occasion.

This subtle difference in culture is something which shirt maker Hawes and Curtis really seems to understand. On its German site, customers are constantly reassured about the high quality of the product. UK customers are instead told the shirts are fun and fashionable and the look is “effortless” – something that’s highly valued by Brits who don’t want to look like they tried too hard.

Germans famously value engineering excellence, which is why there’s greater emphasis on the ‘precision engineering’ of the shirts on the German site. For example, a description of women’s silk blouses talks about the excellent workmanship; in the UK, the same section emphasises being dressed fit for the occasion.

What’s striking is that the sites feature the same shirts in the same styles – it’s merely the product descriptions that vary to reflect the different cultural values of each audience. Hawes and Curtis really understands the subtle differences in values between Britain and Germany and has adapted its brand’s message effectively for each market.

Reaching new global audiences requires more than just language translation. Your brand message needs to be adapted so that it creates maximum impact in its new market.

Transcreation is a much wider process than language translation, and one that requires a team with a broader set of skills and knowledge. If you’re prepared to commit to the process, finding the right cultural voice to reach a new audience can really maximise results by engaging consumers most effectively.