Having worked in the industry for almost 25 years, most of which was spent at O2 where she relaunched the Millennium Dome in London as the O2 Arena, she jumped ship and joined Harvey Nichols as group marketing and creative director in 2014. There, she was tasked with leading a radical transformation programme to rejuvenate the brand.

But there was something Halliwell “really liked” about the Three brand and where it was going, and so she returned to mobile to became Three’s “fresh pair of eyes” in September 2017.

“Three has always had a very strong brand identity in the market; it’s always had that disruptor attitude,” Halliwell tells Marketing Week. “It was never about recreating, it was about taking the legacy and bringing it forward a bit, modernising it and really trying to position it out of the industry.”

A lot has changed since Halliwell was brought on board almost two years ago. Long gone are the days when Three’s social media strategy involved posting direct response ads on Instagram.

After her time at Harvey Nichols, where she learned how to “really build a social media platform that is interesting”, Halliwell says she wanted to engage with customers in a different way.

We’ve been investing in our future over many years and we’re starting to see that come to fruition.

This has led to the creation of a social content studio in the basement of its flagship Oxford Street store, which doubles up as a free hire space for influencers and hub for Three employees to work.

“While each campaign worked individually well, there wasn’t an end game and end strategy – whether it was a brand strategy, comms strategy, company purpose,” she explains. “Everything was just a little bit out of sync. It was just pulling all that together.”

Part of that job has involved rethinking its campaign platform. It launched #PhonesAreGood last October, trying to tackle perceptions of mobile phone use as somehow bad for society by showing how, if phones were invented, they could have prevented Eve eating an apple in the Garden of Eve or Henry VIII beheading Anne Boleyn.

Since its launch, Three’s Index score (which is an average of a range of metrics including reputation and satisfaction) on YouGov BrandIndex score has increased from 5.2 to 6.7, positioning it just outside the UK’s top 10 mobile operators behind giffgaff, which scores seven.

Its score for impression has improved significantly, with an increase from 6.2 to 8.8 bumping it three places up the ranking.

The role of partnerships

A growing roster of partnerships has also been key to Three’s repositioning. It has signed a deal with easyJet to offer its customers free upgrades, and with Snapchat to offer users free data.

The newest collaboration is with designer Henry Holland to launch Three’s 5G broadband in London. 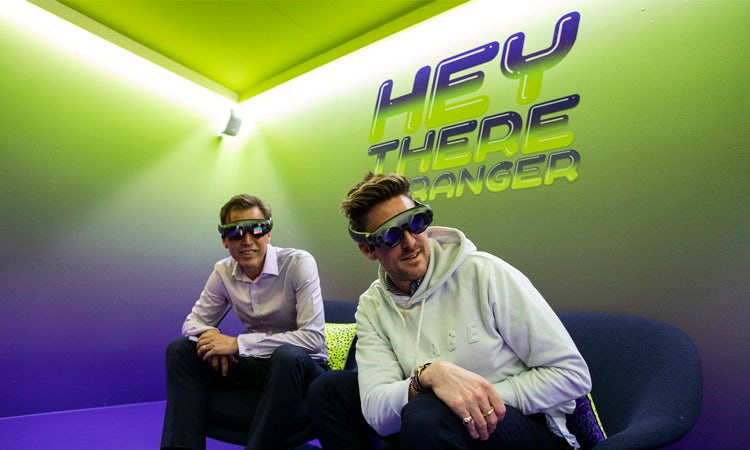 Holland has designed an augmented reality ‘living room of the future’ in Three’s flagship store on Oxford Street so consumers can picture how 5G might look like in their homes. It also features elements from the House of Holland spring/summer 2020 collection to be shown at London Fashion Week in September.

“You’ve got to know what you’re good at and what other people can bring to the party,” Halliwell explains. “We’re using people who don’t typically sit in the technology field, but fashion and design is very much a pivotal part of what 5G technology can bring.

“That’s a similar partnership to easyJet; it’s bringing in those really great people who know how to bring technology to life for customers.”

When it comes to marketing, it all starts with the assets Three already owns. Where once everything was orientated around a TV ad and it would go from there, Halliwell says there are “so many more interesting mediums” to consider now.

“For me, it’s social, our retail assets, our online stuff; it’s the assets we already have and capitalising on that, and then the TV ad or video-on-demand – or however we want to present a produced ad – is the icing on the cake,” she explains.

“It’s all part of the mix. It’s not one or the other; it’s having a good mix and understanding of the role of each platform.”

While Wieden+Kennedy does most of Three’s creative work, an in-house team “keeps the machine running” when Three isn’t doing big campaigns – the next of which will launch at the end of the year to mark Three’s nationwide rollout of 5G.

Three has also been doing a lot of work with media agencies on managing services so it knows who it is buying inventory from to make sure it is getting the best return on investment.

“Everything changes regularly so we try and keep on top of those tools and maximise them as best we can,” Halliwell says.

Keeping on top of changes also means hiring the right people. Three had undergone a restructure before Halliwell joined, so there were a lot of vacancies to fill and an “opportunity to bring in some fresh eyes” alongside her own.

Halliwell has deliberately built up Three’s marketing department to be “a mixed bag”. Its 150-strong team includes people with backgrounds in digital, corporate brand and social. It also hired telecoms experts “because it’s a complex business” and agency and media specialists to help Three have a “better relationship” with its media agency.

“We’ve been investing in our future over many years and we’re starting to see that come to fruition,” Halliwell says. “My job and my marketing team’s job is asking people to reappraise us because we’ve got fantastic 5G spectrum. And in the longer term we will engage with customers in the way they expect and demand.

“Consumers now, their expectations are so much higher because new brands have come in. If you can see an Uber on your phone and see it’s going to pick you up in a minute, that service expectation is then spread across everything you do.”

Three’s new 5G offering will be accompanied by a big marketing campaign towards the end of the year. Halliwell is tight-lipped on the finer details, but if its current multi-million campaign for broadband is anything to go by, we can assume Three will do something equally as engaging and immersive to ensure it takes a “leadership position” in the 5G market.