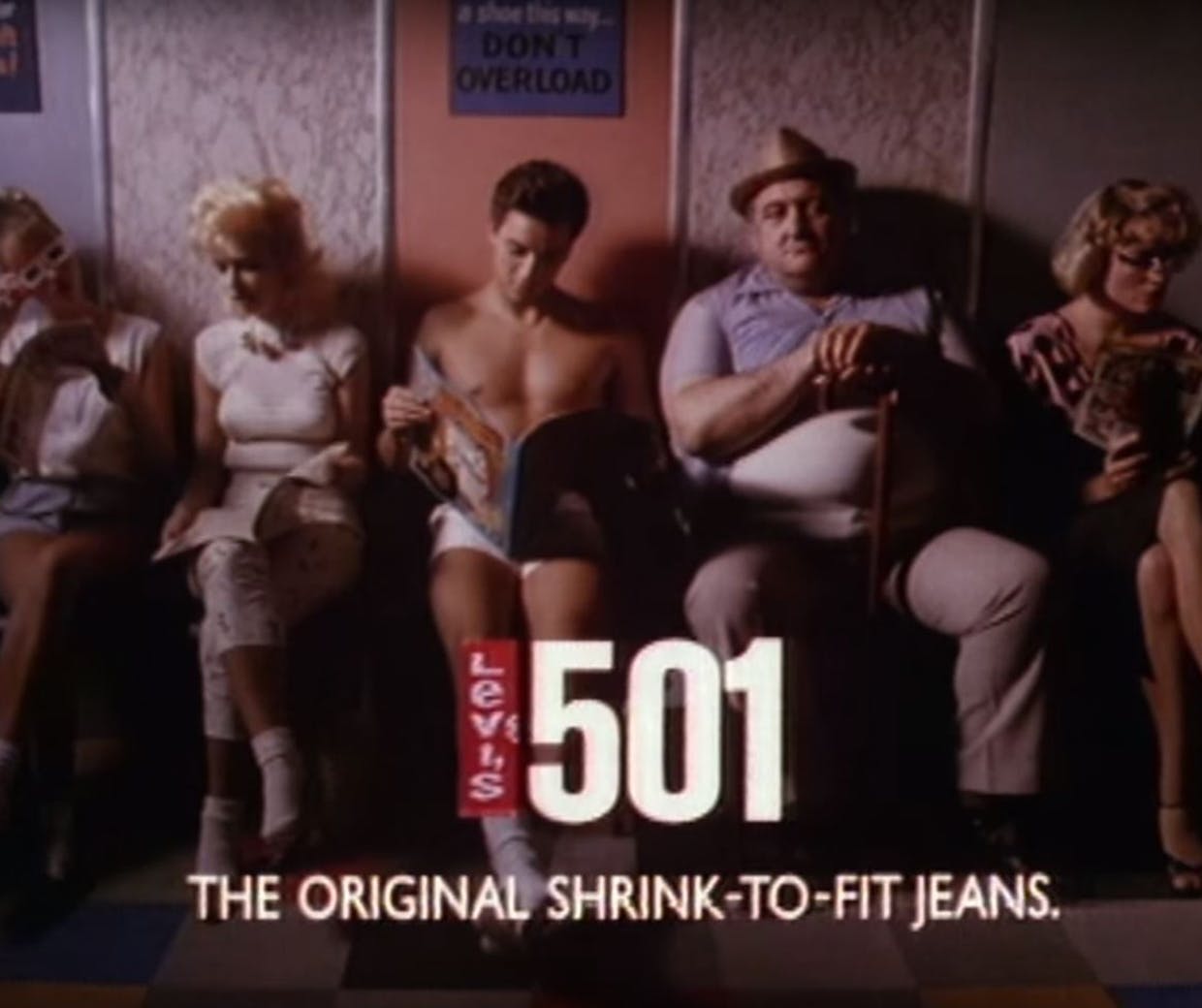 Levi’s ‘Launderette’ ad launched in the UK on Boxing Day, 1985. From its opening shots, where the door of a launderette in small-town America opens in sync with the unmistakable bass line of ‘I Heard it Through the Grapevine’, to the last, where the protagonist sits among the waiting patrons stripped to his boxer shorts, it felt like an instant hit.

And it was, propelling sales of Levi’s 501 jeans up 800% to a point where demand outstripped supply, and it ushered in successive decades of iconic campaigns. It felt effortless. The reality was anything but.

BBH had won the Levi’s account three years earlier in 1982, inheriting a brand and a category in crisis.

“People used to talk about the doomsday scenario when jeans would go completely out of fashion. They were a phenomena that had almost gone,” according to BBH co-founder and the creative director behind the 501 campaign, Sir John Hegarty.

The cachet and sales that had come with being the market leader in a product category associated with counter-culture cool in the 1960s, the item of clothing that had acted as a demarcation between generations were heading south.

In the UK, at least, one of the problems as the 1970s bled into the 1980s was the fragmentation of youth culture. The DIY aesthetic of punk had given rise to a myriad of tribes. The New Romantics, B-boys, Soulboys and Perry Boys were distinct in all ways but one – jeans were not part of their uniform.

Look at the music chart of the time and it was all UK artists. No one was looking towards America so buying a pair of jeans – American jeans – was unlikely.

Hegarty says: “There was a thing called the post-punk phenomena and in fashion that had blown apart looks. We were still in the shadow of that. To some extent there were 20 different looks out there.”

Britain’s pop culture star was also on the rise with its gods – Duran Duran, Culture Club and Spandau Ballet – more likely to wear Anthony Price suits and dresses than denim.

“No one thought anything coming out of America was interesting,” he says. “Look at the music chart of the time and it was all UK artists. No one was looking towards America so buying a pair of jeans – American jeans – was unlikely.”

BBH’s first campaigns, however, did not stray too far from the brand’s roots. BBH decided to ignore Levi’s brief to “make advertising we won’t like” and instead emphasise the product and its origins.

Hegarty says he told them: “’You are American, you are the original, you invented the jean. You have got to find a way of talking about it’. At that time in 1982 there was a bit of a recession and people were looking at value for money. We said there is a value in making a great pair of jeans because it’s workwear.”

The results were ‘Rivets’ in 1982 and ‘Stitching” in 1983, two campaigns that emphasised Levi’s distinct product assets, and ‘Airport’ in 1984, which played up the desirability of Levi’s provenance by depicting an attempt to smuggle a pair of Levi’s into Soviet Russia.

The three campaigns succeeded in elevating the brand’s equity, according to Hegarty. But there was one significant problem: “The truth is they hardly sold a pair of jeans”.

The 501 was Levi’s original jean, launched in 1873 and still carrying the same distinctive button fly and shrink-to-fit requirements. But it had suffered more than any product in the brand’s portfolio.

Undeterred and determined to turn the goodwill the preceding campaigns had engendered into sales, Levi’s adopted a then new market research technique that it had part-funded with advertisers such as Coca-Cola and Douwe Egberts. Ipsos’s Censydiam was a tool that promised to help brands understand the deep-seated human motivations and needs in their category by marrying social and personal motivations.

The results of the research laid the groundwork for the new campaign. Gie Van Cauteren was marketing services manager at Levi Strauss at the time and worked on the 501 relaunch across Europe. He says the research showed two things: Levi’s had a product with unique features that should be celebrated – “a common product with a speciality” – and a desire among prospective customers for identity.

BBH set about its task of bringing the insight to life. Hegarty looked backwards for inspiration, to a time when the 501 and Levi’s had been at the cutting edge.

“Fortunately for me, I was the right age and had grown up with jeans. I also remember when you couldn’t buy a pair. The answer was: I think we go back to the time when 501s were great. It’s a slightly mythical time in the 1960s when they were part of rebellion, a part of youth culture, music.”

Having decided to evoke a time and place, the next step was product demonstration. As well as the process of stone-washing, the ‘Launderette’ campaign aimed to showcase all of the jean’s distinctive assets.

“[The star, Nick Kamen] comes in and you the see the product – the silhouette as they called it – from all angles. Then of course the button fly, a very important part of it. Pulling the button fly down and taking them off. It was a catwalk without it looking like a catwalk,” says Hegarty.

Finally, it was about creating a sense of empowerment. For this, Hegarty tried to make the 501’s status as the ‘original jean’ meaningful. “When you talk about originality kids go ‘so what?’ I don’t care that you’re the original. So we said you are original but in my mind it was about original behaviour. The attitude was original.”

Van Cauteren agrees the confidence and sense of purpose shown by Kamen was central to what made the campaign work. “By going into the launderette, it was the limits of being offensive. He was saying ‘I want to wash my jeans and I will do it. I will just go for it. I don’t want to show off. I just want to wash my jeans’,” he says.

“The 501 at the time was sold unwashed and the shrinking factor of the product was so strong, so when you wash it really takes the shape of your body. It’s not just a product, it’s something that makes you stronger. It gives you an identity. That was the new thing that Hegarty understood very well. We are talking here about an identity and not of a product.”

The reaction to the campaign, which also consisted of a second spot showing a man taking a bath in his jeans to shrink them, was instant.

“It took my breath away. I thought, fucking hell, that’s unbelievable. It had this magic. But you still don’t know,” says Hegarty. “Something happens with a piece of film: you get the music right, the pace of it right, a rhythm occurs and you just go ‘wow’. It was a piece of magic and I was very lucky to be a part of it.”

And it wasn’t just sales of 501s that benefited.

An intervention by the British Advertising Clearance Centre, the body then responsible for green-lighting television advertising, led to an expected spike in sales of boxer shorts when it objected to the original script that had Kamen stripped to his Y-fronts.

The music used in each campaign also benefited greatly. Both Marvin Gaye’s ‘I Heard It Through the Grapevine’ and Sam Cooke’s ‘Wonderful World’ (used in the ‘Bath’ ad) were top 10 hits, a trend that continued well into the 1990s and an opportunity spotted by other advertisers. It was not an opportunity, however, that was initially seen by the record companies behind the two songs, Motown and Atlantic.

Hegarty says: “The record companies wouldn’t let us use the originals. They were re-recorded. The re-issued tracks were hits and then they came back and said ‘do you want to use the originals?’ and we said ‘too late, we are done’.

But it is the campaign’s transformational effect on Levi’s business that will be its lasting legacy.

Van Cauteren concludes:  “We had big problems. I know we were in crisis but by the end of the 1980s we were number one again.”

All marketing is data-driven marketing
BrewDog needs to be honest with itself about its ‘honest’ new ad
To Top
error: Content is protected !!