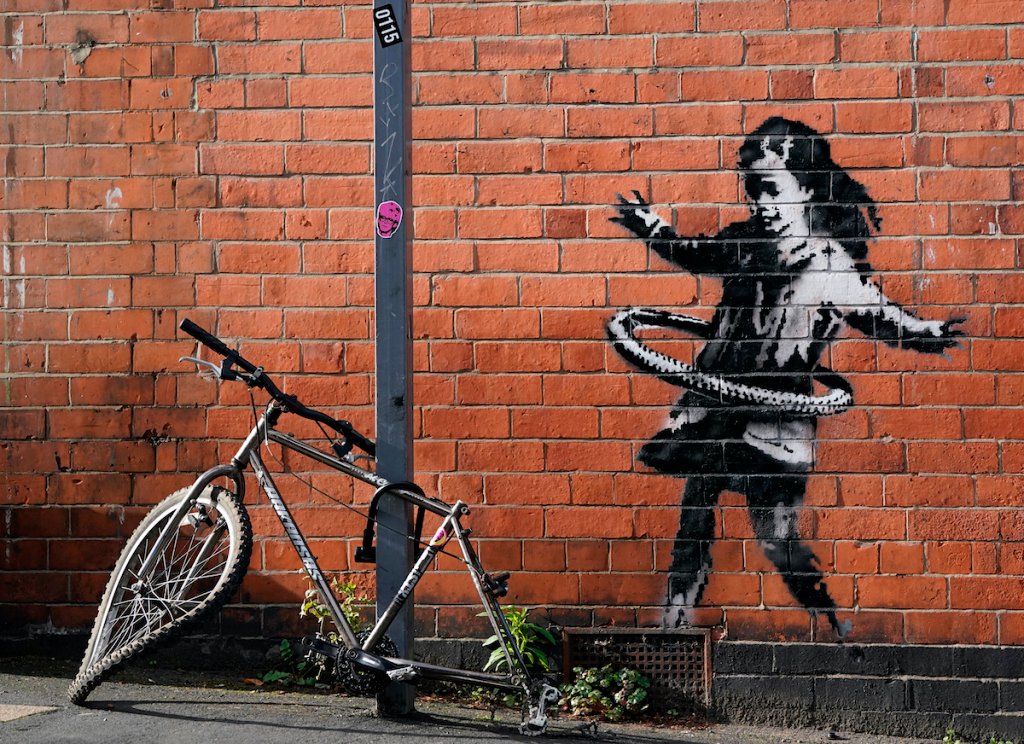 A public mural recently created by Banksy in Nottingham, England, has been sold to Brandler Galleries in the town of Brentwood. According to a report by the Guardian, the gallery purchased the work, which depicts a girl hula-hooping with a bike tire, for six figures from the owner of the building on which it had been painted.
The mural was painted in October 2020, and it was situated next to a bicycle with a missing wheel. It had been on view on a building located on Rothesay Avenue.
According to the Guardian, John Brandler, who owns Brandler Galleries, has previously collected works by the famed street artist. He reportedly plans to present this latest piece in an exhibition at Moyse’s Hall Museum in Bury St. Edmunds this year.

The anonymous owner of the building that had been the mural’s original home reportedly tried to donate the work to a local organization, but those talks fell through. Simon Bristow, who works on the Nottingham Project city rejuvenation board, said that the work will be missed in the city.
“It was great for the city,” Bristow told the Guardian. “It arrived in the midst of Covid when we were all going through a really terrible time, and there was just this brilliant moment of enjoyment, and joy and delight.”
This is not the only new Banksy mural to go up for sale this year. A Banksy work situated on the side of a house in Bristol depicting a sneezing woman became an unexpected selling point for the owners of the home, who had listed the property prior to the mural’s appearance.

The Best Dip Pens for Calligraphy and Illustrations
Second Half of Christo and Jeanne-Claude Collection Sale Brings Total to $11.2 M.
To Top
error: Content is protected !!