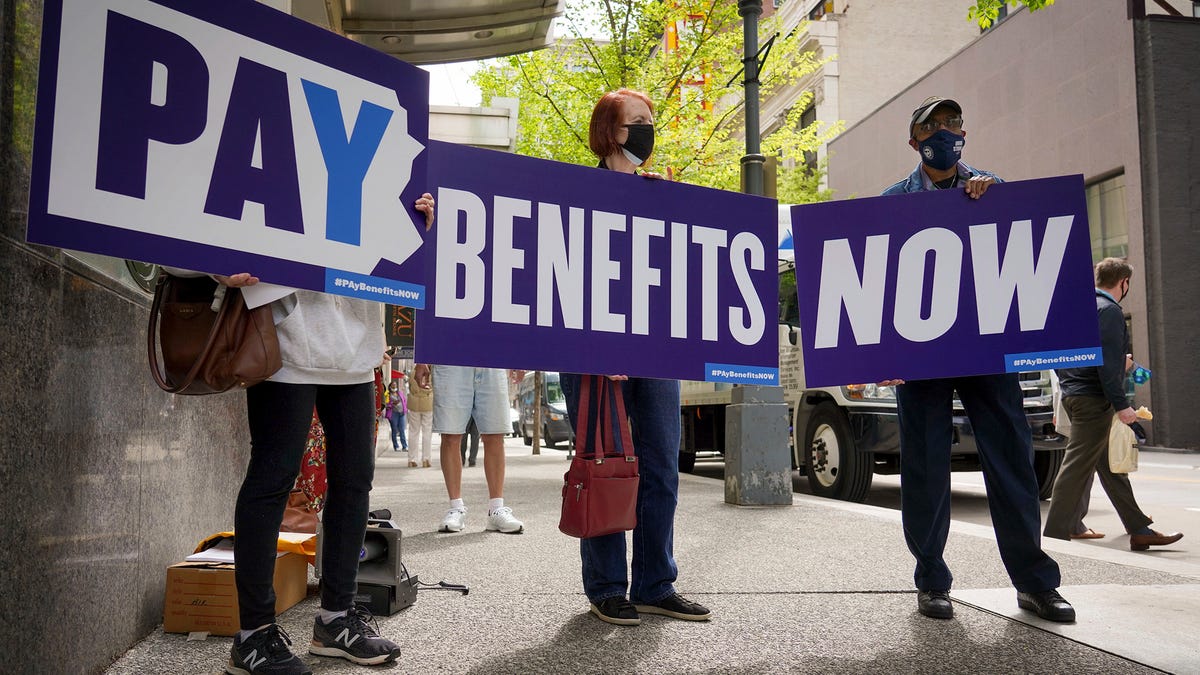 Biden: Unemployed must take suitable job if offeredPresident Joe Biden says anyone collecting unemployment who gets offered a suitable job “must take the job or lose their unemployment benefits.” (May 10)APUnemployment insurance was an economic lifeline for millions of Americans who found themselves out of work during the COVID-19 pandemic. But many discovered a safety net that was frayed and hard to access.Applicants were met by frozen screens and endless waits on the phone as antiquated state systems were overwhelmed by the volume of claims. Getting assistance within a reasonable time frame frequently depended on the state where you lived.And some who needed financial help weren’t certain they qualified given the patchwork of state rules and confusion about new, but temporary federal assistance aimed at getting money to more workers during the health crisis.”Many state unemployment systems were under-resourced and unprepared to support workers during the latest period of mass unemployment in 2020 and 2021,” says Nicole Marquez, Director of Social Insurance for the National Employment Law Project. “We urgently need an unemployment system with national uniform guardrails and standards that centers the needs and experiences of Black, Indigenous, and workers of color.” What’s broken? Outmoded systems – As jobless claims poured in, creaky technology and outdated processes led to massive delays, denials of assistance, and instances of fraud, experts say.”Broken unemployment insurance infrastructures… wreaked havoc for jobless workers who need those benefits but are unable to access them,” Marquez said.Amanda Fortin, 39, has been fighting to get unemployment benefits for nearly a year.Fortin who lives in Columbus, Ohio, was laid off from her job as a nursing assistant after she contracted COVID-19 and was hospitalized in July. Fortin says she’s been unable to get assistance because her  former employer claims she voluntarily quit, and she is currently physically unable to work.Fortin and her daughter are surviving on food stamps and money that Fortin’s sister gives her to help pay bills. Once a moratorium on evictions ends next month, she says, “I will be homeless.’’Hot spots for jobs: Where are the best places for a college graduate to find a job? LinkedIn’s answers might surprise youUnemployment claims hit new low: First-time jobless claims fall to new pandemic low of 444K as layoffs ease and 22 states cut off federal bonus“If you’re a hardworking person paying your taxes and you happen to lose your job, I don’t think you should wait a whole 10 months just to receive benefits when you still have your bills,’’ Fortin says. “They need to reform the” system.Many workers shut out –  The current system often denies unemployment benefits to many members of the workforce, including the self-employed, those making a living in the gig economy, and lower-wage workers, advocates and experts say.Inconsistent programs – State unemployment insurance programs vary widely, from the minimum benefit they provide to their duration, says Marquez.How do we fix it?Tailor benefits to the need – The duration of benefits is often based on a state’s average jobless rate. But individual communities and regions may have far higher numbers of people who are out of work, says Marquez.”These rates vary by race, geography, and industry, and they can exacerbate inequities already experienced by people of color, people living in higher-populated communities, and people in underpaid jobs, particularly women of color,” she says.Make some pandemic changes permanent – The new categories of workers who received assistance during the COVID-19 crisis, as well as the increased payments showed the potential of the unemployment insurance system, successfully keeping poverty in check “despite a record pace of job losses,” says Andrew Stettner, senior fellow at The Century Foundation, a progressive, nonpartisan think tank .Some of the temporary fixes put in place during the pandemic should stay in place for good, some experts and lawmakers say.”We are going to need stronger federal standards and support for the unemployment program,” Stettner says. “This includes .. decent wage replacement and federal benefits for those who do not qualify for state” unemployment insurance.   U.S. Senators Michael Bennet (D-Colorado) and Ron Wyden (D-Oregon) in April proposed a package to improve the unemployment system.It includes offering benefits to those who don’t typically qualify, such as those who work for themselves, reducing the differences between state unemployment programs, and extending assistance when the jobless rate increases.It also would mandate that every state provide at least 26 weeks of assistance, and cover 75% of an average worker’s pay. The federal government also would provide additional benefits during an emergency to enable workers to get 100% of their lost income.     “Unemployment programs are critical to helping workers stay afloat during difficult times, but too many workers still struggle to access their benefits in our patchwork of outdated state systems,’’ Bennet said in a statement announcing the proposal. “And too many receive no protection at all when they lose a job — including many low-wage workers, workers of color, returning caregivers, and self-employed workers.”Follow Charisse Jones on Twitter @charissejones